This page belongs to Golden Forge, so please don't edit this page without his permission.

Senet is the Goddess of Board Games. Originally the very first board game in existence, Senet soon received sentience when she was being used a lot and religiously. Over time however, she has cut ties with the Egyptian pantheon and went on to gather power for herself. She currently lives in Charleston, South Carolina, where she secretly runs the charitable organization known as Board Games Remastered.

Goddess of Board Games

Goddess (Originally a Board Game)

Senet's original form is that of a senet board game, which was finely crafted from purple heart wood, and was plated in solid gold. The pawns were various and large gemstones, ranging from a blue diamond to a common topaz. The sticks used as dice were made of purple heart wood as well. Senet commonly takes this form, and when she does, the pawns form her arms and the sticks form her legs.

Her true form however is that of a Human-like female, standing at 5'8". In this form, she wears a checkered dress along with high boots and dice gauntlets. She also has a large board balanced atop her head, and wears an Ankh necklace. She has blue hair, red eyes, and tanned white skin. She very rarely takes this form, for her effects of the Mist immediately wear off when she does.

Senet also has the capability to look like a Human in addition to her current forms. Named Sally, this human form also stands at 5'8", and wears typical human outfits. She has brown eyes, ginger hair, and plain white skin. Her eyes do noticeably flash red at times, however.

In any of her forms, Senet can wield a very long staff that is at a length of about 6 feet long. This staff is purely golden, and ends in an upwards crescent that surrounds a yellow orb. This yellow orb is the source of most of Senet's spells, and can change form at will, depending on the spell she uses. This transformation purely acts as a warning and an indicator on what she's using next.

Senet originally had no power, sentience, or life at all. She was simply a board game, the very first one in existence in fact. It was a very luxurious artifact too, which belonged to the Egyptian God known as Ra. Pioneering the category, it was played multiple times by the god and several of his friends and family. Eventually, the game was spread down to the mortals as well.

Senet continued to have no life, until the mortals began to use the board game as a means of worshiping the Gods, particularly with the afterlife. This allowed Senet to soon gain a low amount of life... until it eventually became sentient and self-aware. At this point, it simply watched Ra and his erratic actions... for it was still just a board game. When it eventually gained enough power to move, it proceeded to leave the Sun for good.

Senet continued to gain more and more power, until it eventually adopted a gender and became a Goddess, particularly the Goddess of Board Games. She forever held her power over this aspect of life, and was determined to keep expanding her influence and power. Even after the Egyptians fell, she carried on with her own life, creating several other board games such as Backgammon and Chess.

Over the centuries, Senet sustained a substantial amount of power, as opposed to the dozens of forgotten pantheons. In fact, she was even more prominent during the 19th and 20th century, where companies such as Family Game Night made more classic board games. However, her power began to eventually fade, as the Humans were beginning to shift their focus towards sports and television.

In modern times, she has kept a good amount of her power in two main ways. The first way was to have her influence in a new rising category of games, known as video games. Essentially a leech, she has held on to the increasing influence of video games to strengthen her power. The second way however, was to form an organization known as Board Games Remastered. Here, she produced the board games for free, and had stores sell them at very low costs.

Now, she is considered to be the most powerful independent entity there is, using advanced steps of the Mist to keep herself concealed. Due to her power blanketing over board games in all pantheons, it has snowballed for her to become extremely prominent. Even now, she could very possibly take on the rulers of other pantheons, and prove to be a very dangerous challenge. 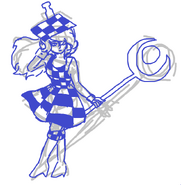 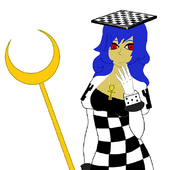 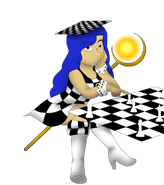 Group drawing including Senet, by Jaz
Add a photo to this gallery
Retrieved from "https://the-golden-roleplay.fandom.com/wiki/Senet?oldid=6519"
Community content is available under CC-BY-SA unless otherwise noted.