This page belongs to Golden Forge, so please don't edit this page without his permission.

Lora is the Goddess of Peace and Prosperity in the Arygarian Pantheon, being the daughter of Lucofry and Medusa, surprisingly enough. While she has all intentions on being generous and helpful, she has been seclusive and somewhat guilt-ridden since the Day of Heart's Decay, which Natis thought she caused. Her current home is hidden nearby the Great Serpent Mound in Ohio.

Goddess of Peace and Prosperity

Lora takes the appearance of a Gorgon, which usually stands at 5'4" tall. Being a Gorgon, she primarily has blue scales with a bit of green scales patterned along the back of her lower body. Her snake hair is a blonde yellow, and her eyes are blue. Her tail is rather long, ending in a diamond-tip.

Noticeably enough, most of the front of her head and upper body are human-like, being white skin. Described as surprisingly beautiful, Lora's face and chest have their qualities of a rather healthy female Human. She wears a bra and skirt, with some extra clothing to hold up the bra. She sometimes wears a mask resembling a usual Gorgon's face, to remain undercover and pay tribute to her mother and aunts.

It has been thought that Medusa's ugly face would turn anyone into stone, even other monsters and deities. It was clearly evident at times too, since her gaze turned others into stone such as the Titan Atlas. However, this wasn't the case for one outsider entity who came across her... Lucofry, the Primordial God of the Arygarians. For what others saw as ugliness, he saw as beauty, and as a result, they ended up in a short affair. This effectively gave birth to Lora, who went over to her father's pantheon as a goddess.

During childhood, Lora was trying to find the perfect aspect for her to have domain over, when she grew up. Soon enough, it was realized that her presence made Humans around her feel more friendly and peaceful towards others. As a result, she claimed the title Goddess of Peace and Prosperity, and was worshiped underneath this title.

When she was a young adult, the Arygarian nation was around. This group of Humans intrigued her for their strength, intelligence, and overall compassion. As a result, she decided to visit the Bratin Market, where she saw quite a few attempts of barter, especially for discounted pomegranates. It was here where she met Natis Prosec, the Leader of the Arygarians. From here, an acquaintanceship was formed, and it slowly developed over time until it became a romantic affair.

However, this wasn't to remain peaceful for so long. Two years after meeting Natis, a pestilence began to fall several of the Arygarians, known as the "Scaled Death", making their skin scaly before suddenly dying. After the death of Natis's parents, several Humans thought that Lora was the cause of this 'curse'. Even when she denied such facts and promised to help reverse the pestilence, Natis was reckless and declared war on the Gods.

During the first battle, the Stale Fruit Battle, Lora hid in a small mound to stay away from the Humans. During the second battle however, Lora decided to try and talk to Natis personally, and get him to stop the conflict. Natis attempted to kill her, but he was backstabbed by Nimir, effectively ending the battle and the war, on the Day of Heart's Decay.

Ever since that day, Lora felt like she had at least some fault in the entire situation. She became seclusive, only answering to so many of the Arygarians' prayers, and only when they were at one of the very sacred areas of prayer. She barely went to any of the meetings with the other Gods, believing that her input wasn't really worth their troubles. She however has left her home at times, and maybe soon enough, she would return to forever keep peace over the lands.

And return, she has done. With the Arygarians and Greeks signing a peace treaty, she was back to attending to her job regularly. She also helped the pantheons when they fought against the Vangosians. And throughout everything... she felt happier, especially with peace being maintained and Natis being alive and happy again. She even began interacting with a few special mortals known as the Kamen Riders. Really, as long as the Scaled Death doesn't strike again... she'll be fine. 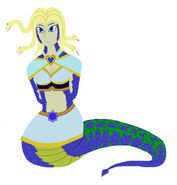 Sketch of Lora by Eliderautor

Drawing of Lora by CookiefiedBeckish 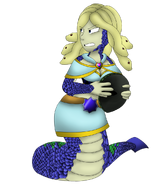 Drawing of Lora holding her mask by HeyJay

Drawing of Lora laid back by Lunafaic

Drawing of Lora wearing her mask by CosmicBites 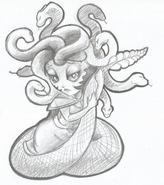 Group drawing including Lora, by Jaz
Add a photo to this gallery
Retrieved from "https://the-golden-roleplay.fandom.com/wiki/Lora?oldid=7113"
Community content is available under CC-BY-SA unless otherwise noted.