Lagneiac, also known as the Perverted Mind, is the Arygarian God of Lust and Love. Born from the Earth much like most other Immortal-Blooded Gods, Lagneiac was born to be responsible for all accounts of romantic and sexual interactions between entities. Since nowadays most relationships are covered by other deities, he mostly concentrates on very specific relationships, and tries to accomplish something for himself.

Genderfluid (Capable of changing genders at will)

Any Height He Wishes

Any Weight He Wishes

God of Love and Lust

Lagneiac tends to take many forms, for he has the ability of shapeshifting. However, his most common form is that of a very large brain with floating eyes. This comes with a brain cord that eventually splits into a numerous amount of tentacles. It is concluded that these tentacles could be used for pleasure and reproduction. He is usually 6 feet tall in this form.

Another common form of his is that of a small, pink-feathered cardinal. He usually uses this form to observe very specific relationships. He also commonly uses the form of a large bipedal turtle, which is extremely buff. The spikes of the shell are actually various tools, such as a baton, some electric pliers, and a whip.

Lagneiac actually has a true form, being that of a pink Tentacled Primalian at around the same size as his brain form. His tentacles are generally smaller and thinner in this form, due to it actually composing the cortex in his brain form.

The truth about all Arygarians, is that they were actually never born by the Earth. They usually preexisted with the Earth, and the Voice lent them power to become Gods. This was the case for Lagneiac, who was a small pink egg that was supposedly kissed by Lust itself as he went with others down to Earth. By default, he became interested and inspired by such a concept and became Lagneiac, the Arygarian God of Lust.

As the primary ruler of Lust and Love around this time, Lagneiac was mostly in charge of invoking reproduction among the new creatures that were born. However, when Humans were brought in for power, Lagneiac immediately snapped at the chance to experiment with his powers. With these experiments, he introduced concepts such as one-night stands, adultery, pedophilia, and other odd concepts.

Soon enough, Lagneiac actually had the idea of invoking such concepts between his fellow Gods. While most of the time his powers didn't work, he effectively worked his powers on Lora. As a result, Lora soon felt feelings for Natis Prosec, resulting in the first Human/God relationship out there. However, by sparking this relationship, he sparked the wars when the "Scaled Death" came around.

However, he has had his major contributions over time. He has always found a partner for each of the Numahs, to preserve the bloodline. As of late, he has been going off on his own account, intending on bringing together relationships to drastically change the world. He has also been intending on finding a fellow God/Goddess of Lust or Love for him to enjoy... or maybe, even Lust itself.

And so, Lagneiac was beginning quite the new age for many people, as he began pairing Arygarians with outsiders... most notably, Mytherica with Natis Prosec. And as it turned out, he himself also managed to find the ripest target possible in his fields of love... Angelica, the Embodiment of Lust. They had quite the relationship for a while, being somewhat bumpy but having Lagneiac always happy.

One day, Lagneiac decided to be a better lover for Angelica, attempting better at romance and dating. This led to Angelica crying and running away, him following until he encountered her ex-boyfriend Nacht. In the end, Angelica chose Nacht over him, and he ran away crying. However, it wasn't at all the end for him... soon enough, he had learned who his own parents were. So now, he lives on, being about as happy as he was before Angelica came along. Perhaps he'll be even happier, if he finds someone else. 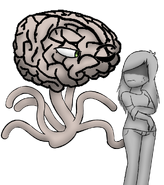 Drawing of Lagneiac discovering Rule 34, by XOBITES
Add a photo to this gallery
Retrieved from "https://the-golden-roleplay.fandom.com/wiki/Lagneiac?oldid=7108"
Community content is available under CC-BY-SA unless otherwise noted.